This series of tests has been specifically taken from a sports science exercise lab scenario and brought into the indoor cycle class using music to guide us and inspire us to explore our aerobic & anaerobic capacities. During these tests you must  be true to yourself and push to your ABSOLUTE limit in order to achieve a true picture of our current fitness If we are able to successfully measure our fitness levels, we can use our newly aquainted calculations to create specific goals as to where we would like to go in terms of our cycle-in fitness.
TESTING PROTOCOL 1: 35 WATT INCREMENTAL TEST
The testing begins post warm up and is comprised of a 35 watt increment test. Each increment occurs over a 2 minute period.  Each participant will push to their absolute maximum level and try to maintain their peak for as long as possible. You must apply force over the crank evenly so you produce the correct amount of watts- consistency is the key!
Of course the first few stages will feel really easy, but please don't let this fool you. Don't make the mistake of going over and beyond the designated Watts too early otherwise you will cave in too early and tests will appear invalid. Also to make this really really accurate you are remain in the saddle at all times (thus reducing interference/influence of body mass upon the test result data)
Once you really cannot hold the watts any longer (your absolute top effort) remember to record the watts you reached and the level you achieved as well as the time you were able to maintain your peak power output.
At this point your test scenario will have terminated HOWEVER remember we are in a group fitness class so have a short break and then attempt to return to your peak wattage. It is highly likely that everyone will possess different fitness levels therefore if you are able to join back in the game it will help the fitter participants to push their boundaries further. It is really important to do this as it will motivate all the class to achieve even higher power peaks as a group.
This chart will help you to measure your current power peak and help you to set a target to use after a designated training period. 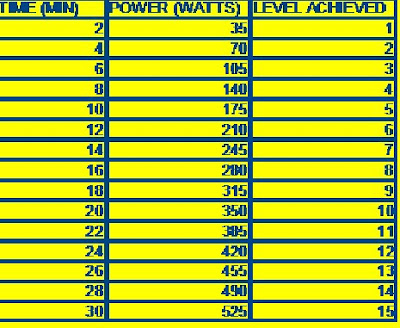 After a small recovery from the above testing scenario,we now perform a battery of tests which show our capacity to work anaerobically.2x30 second shots at producing your biggest power output, I like to simulate a really steep ramp during my teaching during this protocol, so that as a participant you can make more sense of the high demands of the test. When the gun fires, there's no room for thinking,  we have to EXPLODE to produce impressive power!

Love it or hate it, the Wingate test is the ultimate test for our anaerobic capacity! Working anaerobically means that cells in our body have to produce energy immediately and as a result the body cannot utilise O2 as a fuel for the delivery of this energy to suffice the demands of work placed on the muscles we are solely dependant on our immediate energy sources such as ATP -PC within these tests (I don't want to bore you with the details but it means you will be absolutely gasping for air at the end of the 30s and you just cannot sustain your absolute energy power output).

When you have calculated your score, the whole aim upon the repeat of the test would be to reduce the gap between the highest power and the lowest power thus reducing the value obtained. This means that in real life you should be able to hold higher power for longer periods which makes you be able to perform better whilst in training and competition.

Your anaerobic capacity is measured by taking the power output at each 5 second interval and adding these together. So the bigger this number is the better. If you want to get really scientific you would express this value as kilogram-Joules (1 kg-m = 9.804 J. All that is important, is to produce the biggest number and get an even bigger score when you perform the test after a 6-week period. Typically you would perform the test after the 6 week training protocol which I have designed as it is progressive in nature so you would almost certainly perform better once you repeat the tests.

Enjoy knowing where you are right now, looking into the future with your newly acquired goals as well as smashing your own objectives!